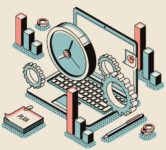 Working as a professional software/firmware programmer means that most of the code I wrote is bound to some form of a non-disclosure agreement. In my free time, I’m often idly coding, but such projects never reach an adequate level for showing them.

On this page, you can find code projects that escaped the NDA (mostly because I wrote them on my own time), blog projects (i.e. series of posts on an argument), and released projects (i.e. products).