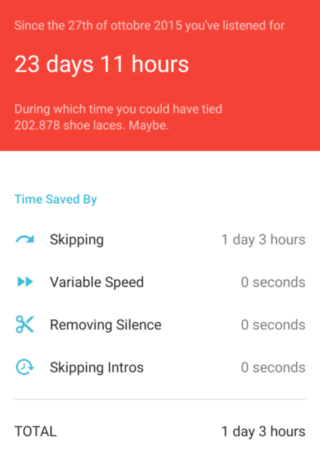 Since few years ago my daily commute time increased reaching some 25′ per leg. This time is quite long and listening to latest pop music hits for two half hours a day, or worse to speakers and DJs easy talks, quickly became boring. So I discovered the world of podcast (well, Max, welcome in the new Millenium…).

There are so many so I would like to share what I found. If you have a good podcast you want to share please leave me a comment, I’ll be happy to try it out.

Techbyter World Wide – “The hi-tech podcast in plain English”, this is the subtitle of this podcast. One issue every week talking about software applications and operating system (mainly Windows) from the user and power user perspectives. About 20′ of tech talk without advertising. Though the podcast is not aimed at pro, it has quite many helpful advices and tips and tricks. I listened all the back issues since the very first when Bill Blinn, the author who worked professionally as a radio speaker, tried out the new media after he quit from the radio.

Over the time I got several good advice – Adobe Light Room to process and manage my digital pictures, Clementine for listening to audio files, Carbonite and Crashplan for backing up data. FastCopy and too many other to cite them all here.

TED Radio Hour – Unless you spent the last 10 years in a cave without wifi, chances are you know what TED conferences are. TED (acronym for Technology, Entertainment and Design) are filmed and you can find them all (I reckon) on you tube. What if you can’t afford video time? Ted Radio Hour to the rescue – hosted by Guy Raz, each episode includes both edited speech from the TED stage and interviews to the speakers about a specific topic.

Hidden Brain – this is another podcast from NPR. Somewhat similar to TED radio hour, Hidden Brain is more like an investigation about a topic. The host is Shankar Vedantam – great at introducing the topic and interviewing guests. I found that the description on their website perfectly captures the essence of this podcast – “Hidden Brain helps curious people understand the world – and themselves”. I like very much the style of the host, very though provoking and very compassionate.

BBC The Science Hour – is exactly what the title says: a (nearly) 1 hour podcast about science by the BBC. Topics ranges from biology, Earth science, space, electronics and robotics, climate… well everything that’s science. There are no fixed or recurring sections and each episode is different. Quite similar to articles on a magazine. Usually interesting, sometimes a bit boring (well I’m not all that interested in biology or wildlife). With some English humor.

Planetary Radio – it’s no secret I like Space and Space Exploration. Being exposed to Star Wars and Space 1999 at early age didn’t help for sure. So this is one of my preferred podcast. Planetary Society is a ONG that promotes space exploration and space science. Mainly active in the USA (where such organizations may actually work), the Society provides wealth of space information world wide. There are two main kinds of podcast – the techno-scientific one and the policy one. The first is about discoveries, spacecraft, probes and satellites, while the latter is about policies and politics pertaining to space, such as Nasa budget, space directives and committee. Again this part is very USA-centric, but since this nation is the leader in space-fare, this matters for everyone.

Embedded FM – the topic is firmware, embedded system, makers. Elecia and Chris host every episode where they interview a guest. If you are in the embedded world, or the makers movement, then you will find many interesting tips. At least one episode made me “duh!?” when they spent quite a lot of time talking about hexadecimal number. Aside for that, the show is pretty good.

Useful Science – this is a low frequency podcast (few episodes per year) about Science. It is organized as a round table with science experts (usualy PhDs). Each episode tackles several topics – one guest presents the topic and it is discussed by the group.

Personally I found this podcast quite a duplicate of other (such as the BBC Science Hour or Hidden Brain) and topics tend to be discussed in less deep way.

Storia della Scienza – this is not, at least strictly speaking, a podcast, but a series of lessons by prof. Lucio Russo teaching History of Science. I found this really enjoyable – thought provoking and insightful. Basically the idea presented in the course is that around the 2nd century b.C. the Greek science were really advanced and defined the scientific method well ahead of the Renaissance when it was re-discovered. Pending Roman invasions, science regressed to a more primitive state, losing knowledge and skills.

During the renaissance, by studying ancient books, scientists like Galileo and later Newton claimed as theirs discoveries and demonstrations.

Moebius – Host by Federico Pedrocchi and Chiara Albicocco, this is the Italian science podcast. Various topics are tackled in each episode and the frequency is about one podcast a week.

I unsubscribed to this one, after a while because I found that arguments are dealt superficially, interviews were quite pointless and the two hosts had the annoying habit, during the interviews, of trying to show how much they know rather than helping the interviewee to expose her/his matter. BBC Science Hour is ten times better.

Fantascientificast – Sci-fi themed podcast. Randomly issues, fantascientificast has several sections each one with its own episode: reviews for books, movies and tv-series. Interestingly this podcast sponsors and retransmits quite an integral version of some Italian conferences – such as the DeepCon and Scienza e Fantascienza (Science And Science Fiction). There are several speakers, some of them are quite rough in exposing or interview, but, if you can go along with uhm, ahm, and chilling english pronounciation, the content is usually great.

Radio CICAP – CICAP (Comitato Italiano Controllo Affermazioni sulle Pseudoscienze – Italian Committee for Pseudoscience claims checking) is an historical debunking group quite similar to the american CSI. The founder of the group is Piero Angela a famous Italian science journalist who wrote “Viaggio nel mondo del paranormale” (Journey through the World of Paranormal), about his scientific investigations in the paranormal and reporting that nothing could be proved and the closer you look, the lesser likely something unexplicable happens. The podcast is mostly on this theme. I’m not really convinced that I like this – speakers are quite terrible, like they are act badly. Content is fair, but not very deep.

Radio Ambulante is a Spanish podcast from NPR. I looked for a Spanish podcast, possibly from South America, to exercise my Spanish and keep it fresh. Every episode is about some fact or story from South America – Peru firefighters, Immigrants from Cuba, Gastronomy in English, and so on. Every episode is well documented and well executed. This podcast is perfect… on paper. In fact is … sad. I know that the history of South America is not so happy and a lot of dark corners are still well present. Also economic distress does not help, I’m sure. But… but, I can’t accept that everything is bad, everything has some evil side, and happy ending seldom happen. So I decided to quit and I’m still looking for a less pessimistic Spanish podcast.

My colleague Cristian suggested me Universo Iker podcast. It is a podcast about misteries in Spanish. Unfortunately this requires a proprietary podcasting platform (ivoxx) and can’t be downloaded and played on a generic podcast application. I don’t like the idea, but I’m pretty sure the podcast is good.